BIOGRAPHY – Information about the artist

At an early age Foot’s father taught him essential farming skills such as carpentry and welding and encouraged him to approach jobs in a practical and creative manner. When just ten years of age Foot began welding together odds and ends from the scrap pile into something he thought had some significance but which the rural community found somewhat amusing.
After completing a college degree in Mathematics, riding a Harley for a couple of years, and then starting a dive business in the Caribbean,  Foot eventually purchased an elderly ketch and set sail towards the sunset. Five years later he arrived in the Whitsundays where he is now, 35 years later, regarded as a distinguished and notably environmentally motivated sculptor.  His works are now displayed in many independent galleries around the world.
Working primarily with marble quarried from Chillagoe in Central Queensland, the focal subjects of Foot’s work have been marine mammals. Most of his later works being life-size and the latest, monumental in scale. This inspired the Singapore Port Authority to commission a group of three Sea lions displayed outside the World Trade Centre of Singapore. His largest marble piece, a breaching Humpback Whale, (8′ x6′ x6′), took two years to complete. An even grander, (10′ x10′ x10′) bronze edition of the Humpback Whale was completed in August 1994. This is currently on display at the Hamilton Island gallery, along with many of his originals. In 2001, his home town commissioned him to do a life sized marble Dugong , now an icon of the Airlie Beach Lagoon, Queensland. 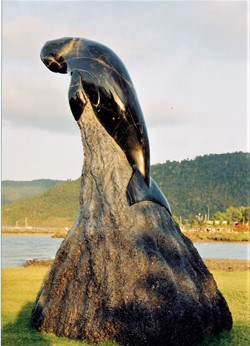 Normally six to twelve months is required to complete a large natural marble sculpture. The
roughing out Foot insists on doing himself using whatever power driven tools are appropriate – industrial demolition saws and jack hammers being his favourite mechanical extensions. The finishing must be done by hand to meet his most exacting standards and here the help of apprentices and assistants make the studio and entertaining experience for the visitor. These originals are seldom sold, as Foot has begun work on a Sculpture Park to house the corpus of his work for future generations to enjoy.
Several successful attempts at sculpting the human body, using oil based clay as a sub-medium for the final bronze, have encouraged Foot to diversify further. He has now completed several commissioned marble originals of human busts, hands, feet and other characterized body parts. His most challenging  work, titled “Freedom”, (1997) is a life sized self portrait in the process of chiseling himself out of stone, with the help of an extraterrestrial who appears to be supplying the man with the tools. A year later a life sized female figure was done Fantasy., and a year later a Mermaid.  Just recently he has embarked on the task of creating contemporary works that still embody his cherished ideals, that of beauty and fine workmanship, see Footsky
In earlier years timber was a favourite medium, the best work being the 7′ x 8′ Phoenix Bird (Phoenix Vip Lounge,
Blacktown, NSW, Corporate Collection). Marble, however, has a way of captivating ambitious artists. To make this beautiful material more affordable Foot has developed the technique of casting marble, and lately this has been expanded on with the evolution of fantastic coloured marble, and a beautiful rendition of jade, turqoise, and red coloured cast marble. From his originals, moulds are taken and limited editions are also made in hot or cold cast bronze. Original works also being made in cast marble as it is virtually impossible to distinguish between the natural stone and the cast, each work being uniquely coloured . It is left to the viewer to savour the enjoyment these exquisite sculptures provide; and the relatively low cost which provides for their creation.

SELECTED EXHIBITIONS: NOTE, in 1999 Foot elected to register a protest of the current reward system for what he feels is “counterproductive art”, by withdrawing from all judged competitions.

Comprising a wide range of Australian made sculpture and jewellery which is not only remarkably beautiful and unique, but durable, priced for any budget and designed to accommodate all tastes in art.